As far as we can find there has been no news release or official Internet posts yet… however my Facebook feed is full of area anglers posting about Bassmaster Magazine’s Top 100 Bass Lakes rankings. According to the most recent Bassmaster Magazine, our own Chickamauga Lake has climbed all the way to the second-best bass fishing lake in the entire United States. Last year Chickamauga was ranked number twelve. 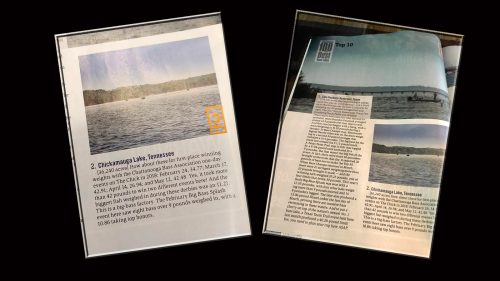 Bassmaster Magazine hasn’t issued it’s annual new release about their top-ranked bass lakes yet, but the magazine with the rankings is hitting newstands and mailboxes.

The number two ranking puts Chickamauga above world-famous bass fishing locales such as Toledo Bend (Texas), Lake Okeechobee (Florida) and dozens of other lakes famous among hardcore bass anglers. Guntersville Lake just to our south in Northern Alabama is now number seven on the list.

Area bass fishermen consider the Chickamauga ranking a blessing and a curse. Facebook comments vary from, “This [ranking] is a total disaster,” to, “It’s awesome. While you’re parking the truck all you see are South Carolina, North Carolina, Alabama, Georgia and Kentucky tags. I guess I know now how they feel on the Okeechobee.”

People like Dennis Tumlin,  Executive Director of Rhea Economic & Community Development, who helped created the FishDayton.com marketing campaign is no doubt, ecstatic. Last year when Chickamauga was ranked a mere twelfth place Tumlin said, “What an honor. When I look at the list of the top selections, I am amazed to be mentioned in the same paragraph as these legendary fisheries.”

The Bassmaster Magazine listing said, “It took more than 42 pounds to win two different events here. This is a big bass factory.”

For the non-bass anglers that 42 pounds references the combined total of five bass, the typical tournament limit. Anything over 40 pounds means anglers caught five bass that averaged eight pounds or above. Many bass anglers across the country have never caught a single eight-pound bass in their life, much less five in one day.

The “big bass factory” can be attributed largely to the Tennessee Wildlife Resources Agency.  In the year 2000 TWRA began an aggressive effort stocking Florida-strain largemouth bass fingerlings every spring. At the same time aquatic vegetation regained a foothold and the lake’s forage base, primarily threadfin and gizzard shad, thrived.

Jolley admits, however, that the popularity and intense bass fishing pressure on Chickamauga Lake is of some concern. So far, however, Jolley says their research and data is showing no ill effect.

“When or if our data shows some reduction or changes in population structure we might need to look at some adjustments,” he said.

Meanwhile folks making money off of bass fishermen from near and far are loving it. Local anglers who arrive late and can’t find a place to park at area boat ramps, or find boats already camped out on their favorite ledges, will keep singing the blues.